Everything About Fiction You Never Wanted to Know.
(Redirected from Asu no Yoichi)
Jump to navigation Jump to search 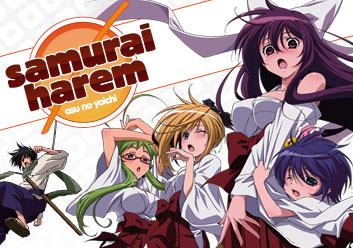 Yoichi Karasuma has spent all his life training in the mountains. Having accomplished all he can in terms of swordplay up there, he moves onto the next phase of his training. That is to go into the city, the Ikaruga dojo, and learn there. As Yoichi finds out when he reaches the dojo (not before he's arrested), the dojo is run by the four Ikaruga sisters. Yoichi begins attending school in the city and trying his best to fit in while fighters of all sorts begin to arrive either to challenge him or the Ikaruga family.

Adapted into an anime for the winter 2009 season.

Tropes used in Samurai Harem: Asu no Yoichi include: