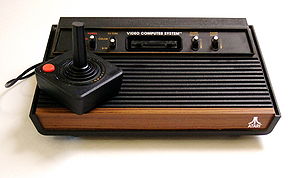 The Atari Video Computer System, later known as the Atari 2600, but best known as just the "Atari" during its heyday, was the first really successful home video game console system, and only the second to feature interchangeable ROM cartridges that allowed new games to be published and installed without modifying the basic system itself. It also featured plug-in controllers that could be swapped out, allowing new kinds of controllers to be later introduced. Originally, just ten games were planned for it. The idea was to make a better system down the line to replace it eventually but the success of the system changed everything.

The Atari was wildly successful, and was one of the forces that drove The Golden Age of Video Games in the late 1970s and early 1980s. Indeed, the sudden failure of the market for Atari cartridges in the wake of the disastrous E.T.: The Extra-Terrestrial and Pac-Man games for the system was the trigger for The Great Video Game Crash of 1983. With only a few exceptions, most of the classic games of the era had home versions available for the Atari, some (Space Invaders, and Atari's own Missile Command and Asteroids) more successful than others (Pac-Man, whose failure to match the immensely popular arcade version disappointed many consumers). It also began the dubious tradition of licensed games, with titles such as |Superman, Raiders of the Lost Ark, and (worst of all) E.T.: The Extra-Terrestrial.

The simple joystick controller for the Atari 2600, with a stick capable of rendering input in any of eight directions (from four buttons) plus a single fire button, has become an iconic symbol of video gaming in general, and of classic video games in particular. Many '80s home computers, such as the Atari 8 Bit Computers, the Commodore 64, the Atari ST, and the Amiga also accepted the Atari's joystick controllers, as did the Sega Master System and Sega Genesis.

The Atari 2600 was actively supported for 14 years, from October 14, 1977, to January 1, 1992, making it the second-longest supported video game system in U.S. history, the longest running being the Neo Geo (January 1990-August 2004). The Sony PlayStation 2 (2000–present) is expected to be supported for as long as it's selling and might surpass both in longevity.

About 10 years ago, a homebrew scene dedicated to making new games for the system appeared.

AtariAge is the biggest Atari fan Web site online and features an almost complete archive of legally downloadable 2600 ROMs (as well as ones for Atari's other systems). Only a few games are unavailable, such as Activision's 2600 library (for legal reasons, but they're available elsewhere online) and a handful of woefully obscure titles.

Games available for the system included

Retrieved from "https://allthetropes.org/w/index.php?title=Atari_2600&oldid=1750015"
Categories:
Cookies help us deliver our services. By using our services, you agree to our use of cookies.