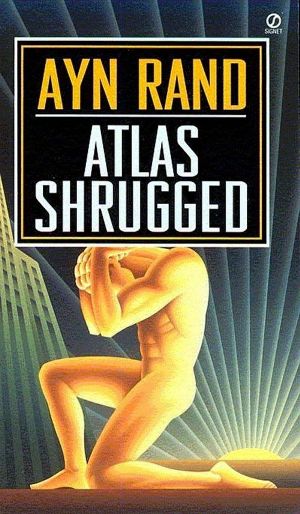 It's Twenty Minutes Into the Future. The government is evil and stupid, intent on draining the decent, productive, people dry. The average Joe is clamped hard on the government teat, and happy about it. The people are Les Collaborateurs, busy gaming the system for every drop before it crashes, or self-deluded fools certain they can fix everything with just a LITTLE more control. There is no public resistance.

Worse, the few people who are still productive are disappearing, one by one. No one ever hears from them again, and their friends and relatives are left with nothing but a question:

Welcome to the world of Ayn Rand's Atlas Shrugged.

The title is based on a popular misconception that in Greek mythology Atlas carried the world on his back [1]; as Hank and Francisco discuss during the book, if he ever tired of carrying that weight on his shoulders, all he needed to do was shrug, and it would fall off. The working title for the novel, before its publication, was The Strike.

The book is most widely known for its condemnation of religion and altruism, as well as its support of free-market classical liberalism (which Rand called "Capitalism," although Marxists and Anarchists use the term "Capitalism" in a completely different sense). Other themes include its celebration of the individual and the argument that suffering is not a necessary part of the human condition.

For those that are interested in the technical details of Rand's ideas, there is a Useful Notes page on Objectivism (warning: RL politics/philosophy ahead).

A film adaptation of the book's first part was released on April 15th, 2011(income tax day) after decades in Development Hell. It has its own page, here.

An adaptation of the book's second part is already underway, with plans to release it on November 6th, 2012(election day).

Tropes used in Atlas Shrugged include:

Retrieved from "https://allthetropes.org/w/index.php?title=Atlas_Shrugged&oldid=1912222"
Categories:
Cookies help us deliver our services. By using our services, you agree to our use of cookies.