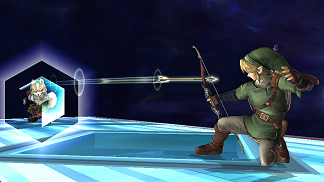 Luckily, My Shield Will Protect Me—and hurt you.

Because sometimes dodging and blocking aren't quite enough. The ultimate way to evade an opponent's attack is to send it right back at him.

This can be done through magic, specialized Deflector Shields, thinking with Portals, ordinary old mirrors, a cartoonish U-shaped pipe, or just sheer momentum-reversing martial arts. Either way, there's nothing like smacking your enemy in the face with his own attack, possibly with some added power.

If both combatants have this, it can lead to Playing Tennis With the Boss.

Similar to Catch and Return, only without the Catch but with all of the Return. See also Counter Attack, Deadly Dodging and Reflecting Laser. Once Evil Eye appears, its interaction with mirrors will be either clarified or abused.

Compare Hoist by His Own Petard.

Examples of Attack Reflector include:

Retrieved from "https://allthetropes.org/w/index.php?title=Attack_Reflector&oldid=1784760"
Categories:
Cookies help us deliver our services. By using our services, you agree to our use of cookies.