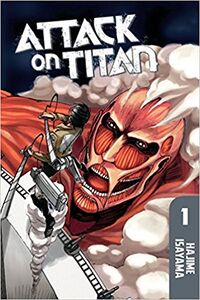 Attack on Titan is an anime/manga about humanity's struggle against Titans, man-eating giants. The story starts in the year 845. A little over 100 years ago, the Titans appeared, and pushed humanity to the brink of extinction. Humanity retreated into stronghold with mighty walls the Titans couldn't breach. Since then, humanity has been locked in a stalemate against the Titans.

Eren is a boy who dreams of the world outside the city walls. This fantasy is fueled by the fabulous descriptions of his bookish friend Armin. Even Eren's level-headed foster sister, Mikasa, can't talk him out of it. So what if there are human-eating giants outside the city? As long as people know how to kill them, and the city walls keep the giants out, human civilization can slowly rebuild, and eventually reclaim the world. However, shortly after the story begins, a colossal Titan[1] appears, and destroys an outer wall gate, letting its smaller kin into the city.

It is known for Anyone Can Die, so don't get too attached to anyone. There is a reason why their city is the last human settlement on the planet. Between deaths and the initial mystery sounding the Titans, this show has lots of spoilers to avoid (possibly even on this page). The show goes far beyond simply showing fighting between humans and Titans. Plenty of attention is paid to the virtues and faults found in humans.

From its relatively modest beginning, the manga managed to become the 17th highest seller in 2010, and a live-action film adaptation was released in 2015.

Tropes used in Attack on Titan include:
Retrieved from "https://allthetropes.org/w/index.php?title=Attack_on_Titan&oldid=1720220"
Categories: