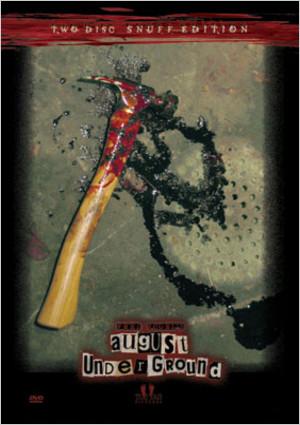 Come on, I got something to show you...
—Peter

You know that sequence in Henry: Portrait of a Serial Killer where Henry and Otis break into a house and videotape themselves torturing and murdering the residents? Stretch that out to feature length and you pretty much have August Underground.

Presented as a degraded serial killer home movie, the film follows a sadistic psychopath named Peter as he commits random acts of torture and murder, all of it recorded by his unnamed and unseen (but very talkative) accomplice. Among the people they brutalize and/or kill are a female hitchhiker, an old woman, a convenience store clerk and two of his customers, twin brothers, and a pair of prostitutes. A girl named Laura is also kept captive in Peter's basement, beside the corpse of her dead and castrated boyfriend, Michael.

A sequel, subtitled Mordum, followed in 2003. This time around, Peter is being helped out by his sadomasochistic girlfriend Crusty, and her sexually depraved manchild brother Maggot, with whom she has an incestuous relationship. The trio initially get along well (barring random outbreaks of infighting) but after a while, things turn sour between Peter and Maggot over the affection of Crusty.

The final installment of the series, Penance, was released in 2007. Unlike its predecessors, the footage of this one is near-mint, so we can see all the horrors inflicted upon the victims in crystal clarity. Now it's just Peter and Crusty, whose initially lovey dovey relationship is breaking down, with the two deranged individuals beginning to turn their violent impulses on each other.

Of the three, Mordum is the most well known, and with good reason; coming off like an experiment to create "the sickest shit evar!!!1!" it features things like rape with a severed penis, cannibalization of a headless and maggot-infested infant, a young child's rotten corpse being sexually abused, and a woman who is covered in blood and vomit being cut open and "gut fucked".

This series provides examples of the following tropes:

Crusty: (while in a crack house): These people are fucking sick!

Peter: (while looking at statues of Biblical figures): You know what I don't understand? I don't understand, you know, like, in, y'know, in the bible, and y'know, the stories that you hear, y'know, they're always upset, and weeping, and crying and stuff like that. These people just have a stoned look on their face. Get it?
Cameraman: That was bad.

Peter: Doesn't she look smart like that?
Crusty: That's because I'm a librarian, now fuck me!

Crusty: (mockingly): You're not gonna have to worry about growing up now, sweetie!