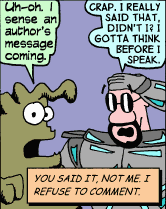 "Whew, glad we caught that one in the bud."

An Author Filibuster is the extreme Anvilicious case of Writer on Board, where the plot stops dead in its tracks to give the author an opportunity to preach their message to the readers or audience, often very political or ethical in nature.

It's worth noting that writing a work of fiction neither adds nor subtracts evidence from a point of view. It may display evidence, it may make an argument using that evidence, it may convince the reader using that evidence. Authors should remember though a work of fiction doesn't prove anything. The fact that the author expects us to take their fictional world as instantly applicable to real life is part of what makes the trope so grating.

If this is the climax of the book, it's often a case of Talking the Monster to Death.

If a character is delivering the rant, it's also a Character Filibuster. If the author's opinion is the purpose of the work, it's an Author Tract. A main cause of Don't Shoot the Message. Whether or not any specific reader considers an Author Filibuster a good or bad thing is usually dependent on whether or not said reader agrees with the content of the filibuster, although this is not always the case.

Examples of Author Filibuster include:

Retrieved from "https://allthetropes.org/w/index.php?title=Author_Filibuster&oldid=1954946"
Categories:
Cookies help us deliver our services. By using our services, you agree to our use of cookies.