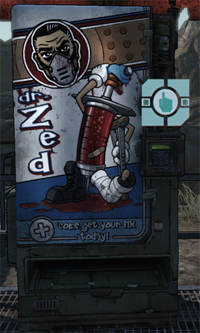 In The Future or sometime soon, you won't need a steady hand to heal people, some machine is already doing it for you. In a futuristic setting there will be machines that fix human bodies automatically. If a human doctor is participating in it at all, he will only press buttons and won't even touch a scalpel.

The appearance of these machines can range from complex apparatus to seemingly magic circles.

Not to be confused with the character from Cars.

Note: There is a difference between this and Save/Heal points in video games. Unless the healing effect is referred to In-universe, it's an Acceptable Break From Reality.

Examples of Auto Doc include: