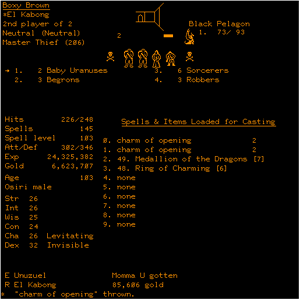 Avatar is a multiplayer Dungeon Crawling Role-Playing Game for the PLATO Network, created in 1977-79 by Bruce Maggs, Andrew Shapira, and David Sides. It was one of the most popular games on the network, and was updated several times over the years. It's similar to the earlier Moria, but more advanced and more closely based on Dungeons & Dragons rules.

Players create an Honest Rolls Character, of one of ten races. You start in the city, and as a member of the Nomad guild. From here, you join with other players to create a party, and go adventuring in the dungeon. You could go in alone, but you won't have all the skills needed to survive and collect treasure. The dungeon is many levels of rooms and corridors filled with monsters, traps, and treasure chests. There is no final goal, other than reaching the bottom of the dungeon and defeating the most powerful monsters. Returning from the dungeon, you can visit a store, put your gold in a bank (monsters may steal it if you have it on you), join other guilds (depending on your character's race and stats), or visit a morgue where you can revive dead characters.

The guilds are not only places to find people; they affect which spells you can cast, and which items you can carry. The guilds are where you increase your Character Level, and they give you quests. In addition to Nomad, you can join one guild for free, and you can switch that guild in the city. Further guild memberships cost gold, as does leveling up.

Avatar was probably the first RPG videogame to run into the economic problems of modern MMORPGs. There is a finite amount of gold in the game, and as time goes on it moves from the monsters to the players. As the monsters run out of gold, the game becomes much harder for new players. A Game Master is needed to manage each session's money, by deleting abandoned characters or periodically resetting the game.

Also included a Level Editor where you could make your own dungeon maps.

Not to be confused with the cartoon or the movie, or the video games based on either of those.