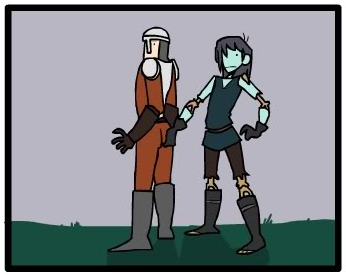 Awkward Zombie is a wacky weekly gaming web comic by Katie Tiedrich. While many of the strips are stand-alone gags from various games such as The Legend of Zelda or World of Warcraft, the webcomic also features many recurring Super Smash Bros. characters living together in a building and dealing with various hijinks.

Could until very recently be described as not actually having much to do with its title, up until this strip.

There are also many pages that appear on her DeviantArt gallery only.

She has also started to illustrate (but not write) a brand new webcomic called Aikonia, which can be found at this site.

The author is also currently trying to raise money to print the comic book, which can be found here. It's currently well over it's goal, and the Kickstarter isn't even done yet. Hell yeah.

Tropes used in Awkward Zombie include:
Retrieved from "https://allthetropes.org/w/index.php?title=Awkward_Zombie&oldid=1887642"
Categories:
Cookies help us deliver our services. By using our services, you agree to our use of cookies.