Lithuania: R-Russia! Everyone was pretending not to hear anything!
England: W-what? Everyone's awake, after all?
France: That's because you were having a lover's quarrel here.
England: Don't say it was a lover's quarrel!

Japan: Well, it's not like we were peeping and such...

England: That's why! The alien and friends over there, just shut up! You have been trying to irritate me since just now.
America: Even if you said that, the truth is you just wanted to sleep together in the same room in the same way we did in the past, right?
Tony: Love me bubu. Kiss me bubu. 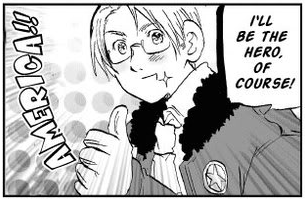 Now is the time we allies must take a stand for the sake of the world! Should we not fight in the name of justice? Let our hammer of righteousness strike deep into the heart of this evil! Starting with this lame-o Italy!

England: Such a (stupid) design is beyond me, of course. How (stupid) like you, America.

America: That's good! Because I also made this technology for (beating the crap out of) you! :D

America: Okay--let's start from the be-gin-ning! England, you're my backup! Next, France! You're my backup! Uh, who's next...China, I'll have him as my backup. Lastly, Russia! Yours is the grave duty of backing me up!
Russia: Um, may I ask a question? What will you do?
America: Mm, that's actually a very good question, Russia! I'll be the hero, of course!

Ahh, fuck it all! You only got so far thanks to me prat, don't you dare act cocky with me!

England: (translated) "The seven seas are like my backyard, romance and plundering, I manage holiday houses in India and Hong-Kong!"

England: ...When it comes to spies, no country can beat the great England!

France: Oh, if it isn't the friendless England!
England: Dammit, being in Europe makes me so mad!

I've always been alone, so it's great seeing everyone so alive. Besides, soon it'll be the last chance I can see their faces. Whenever I imagine how they'd look begging for mercy, I can't help but smile.

Estonia: Russia, it's not right to bully the weak!
Russia: But it's so fun!

Geez, you guys... aren't there more vital things at hand than arguing? Like doing something with that tasteless uniform.

What ruckus, this? Ah, England, France, and America fighting again. These lands of Europe, they like fighting so very much.

Taiwan: Shut up teacher!
China: T-Taiwan...!
Taiwan: Please, you need to keep quiet when you’re in public areas like this! If you’re too noisy, you’ll scare away all the birds and make the flowers die...
Shinatty: Please forgive us; the old man’s gone a bit crazy, he was having flashbacks about his childhood!
China: I’m not an old man! I’m young, cool, and hip!
Taiwan: ‘Cool and hip?’ That just dates you even more...