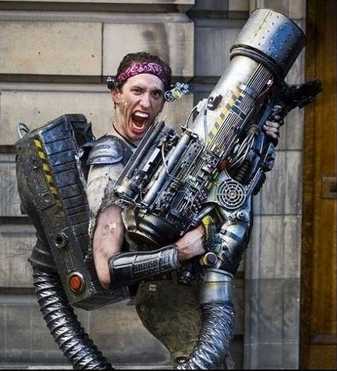 Well, at least it's not a concealed weapon.

"My cause is just... my will is strong... and my gun is very, very large."
—Doomguy, from the Doom comic

A BFG is a piece of personal artillery used by an individual and chiefly defined by its frickin' bigness. A BFG might have a mounting or bipod, but the main use in-story is for our warrior to sling it around as a personal weapon. With gritted teeth. While standing knee-deep in a pile of spent brass, shouting Come Get Some!

The BFG is a visual metaphor for power, and therefore has a lot of uses as a trope. If The Hero, particularly the Action Hero, gets hold of one, it's likely because the writers intend to escalate the action, most likely with a Storming the Castle scene where he takes on a whole army.

A BFG chiefly differs from a Hand Cannon in that the Hand Cannon is large for a pistol, while the BFG is large for ... well, it's just plain large. A BFG, possibly after Sucking-In Lines, may cause people to be Blown Across the Room from the mere recoil of firing it.

Not to be confused with Roald Dahl's book and character The BFG (Big Friendly Giant), the 1989 film or the 2016 film versions thereof, TNA Wrestling's show Bound for Glory, or Big Friendly Dog. Or another type of gun.

Examples of BFG (weapon) include:

Eboshi: "Now watch closely, everyone. I'm going to show you how to kill a god."

"I think Cable should be holding a BIG gun on this cover."
"Well yeah, he usually is."
"Pffffft, no, I mean a REALLY big gun."

"Don't worry, it's got a stun setting!
"A fifty millimeter gatling cannon with a STUN setting?!"
"Uh...Yeah.

Monica Rambeau: Those are some big f%43ing guns!

Hellboy: You woke up "the baby!"

Coulson: So that's what it does.

When the Piecemaker is first used, it uses a ballista bolt. The results were so horrifying (And probably expensive) that they just tied a bunch of bolts together instead. The results were even more horrifying. The scene in Night Watch where it is fired - as a warning shot! - at an assassin is perhaps the most hilarous (and most destructive) scene in all of Discworld. Yes, this even includes the exploding cabbages.

In fact, when Vimes mentions seeing it tested, apparently the target vanished so did the two targets on either side, and a flock of seaguls who happened to be in the wrong place. I.E. right above Detritus. It's the only weapon that can open both front and back doors simultaneously.

In The Fifth Elephant, its destructive power was so terrifying that Vimes actually threatened an inanimate secret trapdoor into opening just by pointing it in roughly the general direction he thought it was in. Later, when Detritus used it to open the front door of an enemy castle, Vimes labelled it as a national emergency rather than a weapon. Several paragraphs later:

Vimes: Detritus, you can't fire that off in here! This is an enclosed building!
Detritus: Only till I pull dis trigger, sir.

Wedge: "A laser cannon is nine meters long, Five."
Kell: "Not the essential components and housing, sir. Strip out all the computerized aiming and synchronization equipment, the diagnostics, the flashback suppressor, I think we could chop it down to a meter and a half, two meters."

Taken to the extreme by Erkum Pol, The Big Guy even by the standard of the nine-feet-tall-on-average Mardukans. He likes BFG's, and can carry the aforementioned tank gun without Powered Armor. On the other hand (one of them, anyway), his aiming skills aren't even up to Imperial Stormtrooper Marksmanship Academy standards. When he takes the tank gun along on a hostage rescue mission (supposedly just for intimidation purposes[1]), Hilarity Ensues (for "hilarity" read "an entire city block being set on fire").

Eli Wallace: Wow, that is a big gun.

Major Kane, Mordant 607th Heavy Armoured Regiment: One of the light walkers carried a weapon of lethal effect. It fired a form of ultra-high velocity projectile. I saw one of our tanks after having been hit by it. There was a small hole in either flank - one the projectile's entry point, one its exit. The tiny munition had passed through the vehicle with such speed that everything within the hull not welded down had been sucked out through the exit hole. Including the crew. We never identified their bodies, for all that remained of them was a red stain upon the ground, extending some twenty metres from the wreck.

Pip: Quit looking at me like that! I just grabbed the biggest, most-lethal looking guns I saw! Admit it! They don't look like short, short range weapons, do they?!

Megatron: (walking up to the Maximal Base, when half a dozen turrets come from out of nowhere) Ah! I come in peace!!
Rhinox, through megaphone: (turrets fold away. twice as many turrets, three times as big unfold and point at Megatron) You'll leave in pieces.