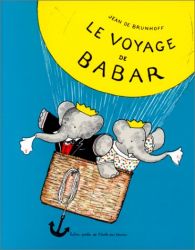 Babar is a series of popular French children's books first published in 1931, about a young elephant who leaves his jungle, visits a large city where he befriends an elderly lady and learns of human ways. After he returns to his jungle, Babar shares what he's learned about human ways with his fellow elephants, followed by the elephants deciding to construct a city they name Celesteville. Finally, Babar is made king of the elephants.

An Animated Series was produced by Nelvana and originally aired between 1989 and 1991 and in 2000. The series was broadcast in 30 languages in over 150 countries, making it one of the largest distributed animated shows up to that point. There have also been two movies, but both came and went at the box office with little fanfare.

A new All CGI Cartoon version, Babar and the Adventures of Badou, began airing on the Disney Junior block of Disney Channel on Valentine's Day, 2011.

Tropes used in Babar include:

Tropes featured in the original books include:

Tropes featured in the Babar animated series include:

Tropes featured in The Movie include:

Tropes featured in Babar and the Adventures of Badou include: