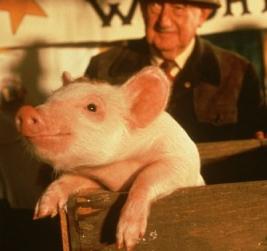 Based on a book named The Sheep-Pig by Dick King-Smith, Babe is the story of a little piglet ("Babe" to the other animals he encounters and "Pig" to all the humans -- including the narrator) that gets plucked from his life as future dinner to become a prize at a fair, ending up on the farm of sheep rancher Mr. Hoggett. His ranch is quirky already, and taking in Babe, cared for by his sheepdog Fly, only makes things stranger.

As it turns out, Babe is a kind and trusting sort that quickly befriends most of the farm, and uses his friendship to become an effective sheep herder. From there, Farmer Hoggett decides, instead of using Babe as a featured part of the dinner table, to use the little pig to actually compete in sheep dog trials.

While theoretically a children's movie, its offbeat charm and heartwarming (and remarkably Glurge-free) story made it a favorite amongst all ages. It even proved to be Oscar Bait, much to the surprise of many -- and the chagrin of the Academy, who made efforts to keep further "children's movies" from qualifying in the future. Hello, Best Animated Picture category! (Best Animated Picture says, "hi.")

The film was followed by a 1998 sequel, Babe: Pig in the City, which despite its cutesy-poo title manages to take an already fairly dark story and turn it very, very much Darker and Edgier. The fact that George Miller takes over as director (he produced the first film and Chris Noonan directed) has quite a bit to do with it. It has been called The City of Lost Children -- Except This Time the Children are Adorable Kittens, which gives you an idea of the tone. More information can be found here.

The book also got a sequel-of-sorts, a somewhat Lighter and Softer book called Ace, which tells of Babe's great-grandson Ace -- so named because he has a spot on his side that resembles the Ace of Clubs -- who has the curious and unique ability to perfectly understand human language. None of the characters from the original book appear, though Babe and the Hoggetts are mentioned a few times.

Tropes used in Babe include:

"I tried making it with the chickens and it didn't work!"