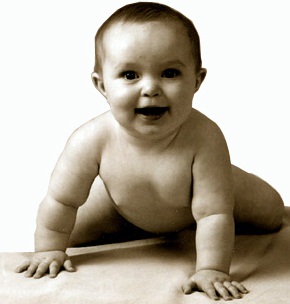 Behold! The magic wand to solve all your life's problems![1]

In a lot of fiction, babies make everything better just by turning up. Babies mend broken relationships, restore someone's faith in life, and stop wars. Even the Screaming Birth won't put onlookers (or the mother) off pondering the magnificence of life - even onlookers who are normally so easily squicked out that the messiness of childbirth should have rendered them unconscious. All angst is dissolved with their first cry of life, all the problems in their parents' worlds melt away with one glimpse into those innocent blue eyes, the world's problems are lost in the significance of their first dirty nappy...

Needless to say, the practicalities of having a baby are mostly glossed over, and even previously irresponsible parents will be instantly willing and able to step up and take responsibility for the newborn.

Compare The Baby Trap, which is when a character who believes in this trope attempts to invoke it without the knowledge and/or consent of their partner. See Babies Babies Everywhere for related tropes. Truth in Television for some—namely, couples who straighten their problems out before starting a family, and seemingly-unlikely mothers and fathers who take to parenthood like ducks to water. A character impervious to the cuteness of babies is frequently a Child-Hater. See also Children Raise You, where the situation is less idealistic (though with much the same outcome) and the caretaker is not the child's biological parent.

Needless to say, in real life babies are a huge, life-long responsibilities, and even if they do solve some problems, they come with plenty of complications of their own. They are not epiphany therapists and definitely not magicians. They won't make an abusive relationship any less so (in fact, they just provide a new target for abuse), nor will they end wars or alleviate poverty.

Polar opposite of Children Are a Waste.

Examples of Babies Make Everything Better include: