Jump to content
(Redirected from Back From the Dead) 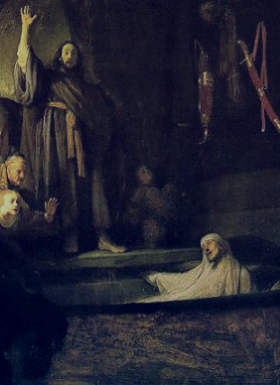 Wise From Your Grave!

A major character, possibly even a popularly nasty Big Bad, has been Killed Off for Real, pronounced dead and buried. However, the established laws of the universe allow for Functional Magic, a Sufficiently Advanced Alien, Applied Phlebotinum, Deus Ex Machina or similar agency to intervene and subvert what naturally follows dying. Namely, staying dead. (In some cases, an explanation isn't even bothered with.)

Maybe the writers were running short of new ideas and decided to rehash some old ones. Maybe the actor has recently acquired some indecent photographs of the producers. Maybe the new writer was devastated his predecessor killed the character. Who knows? He is now Back From The Dead.

The form of afterlife can vary pretty widely. They may "simply" be resurrected or reincarnated (usually as a sentient pet animal), physical or mental alterations optional; or we may now have a ghost, or vampire... zombie, angel, godling, demon... haunted car... okay, that last one will be hard to top (except with a Love-matic Grandpa!). Bringing someone back from the dead by supernatural means is generally treated as being a negative thing because of how unnatural it is.

If a character cannot come back from the dead entirely, they may show up as a Spirit Advisor or The Obi-Wan, letting them be literally dead, but allowing them to interact with the living.

In the Star Trek: Voyager episode "Mortal Coil", Neelix actually dies for real but is (some would argue unfortunately) brought back to life some 18 hours later. This is an example of Contractual Immortality. In order to qualify for being brought Back From The Dead, a character in a TV show would have to be still dead at the end of one episode and resurrected, by whatever means, in a later episode (2-parters don't count).

This is exceedingly common in American Superhero comic books, to the point that whenever a popular character dies, it's a given that they'll be back on within no less than five years. At one time, it was said that "Nobody ever stays dead in comics, except Bucky, Uncle Ben, and Jason Todd." Naturally, since that phrase was coined, Bucky and Jason Todd have since been recalled to life.

See Death Is Cheap for when this becomes a regular feature of a 'verse, Sorting Algorithm of Deadness for the odds a particular death will stick, and the accompanying betting pool for which modern Lazarus is due back next. See also Resurrective Immortality for where this is an everyday part of a character's life.

A general rule of thumb is that if you Never Found the Body, the character is Not Quite Dead in the first place (and therefore not a candidate for this trope). One of the most common examples of this is that if a character falls off of a cliff or other high structure, especially into water, he or she is almost guaranteed to still be alive; see Disney Death. An explosion gives more reasonable odds. Of course, even if Deader Than Dead, even if you see the body and you've atomized it so finely that each individual molecule is a galaxy apart... there's always Time Travel. Removing the entire thing from existence can be done, and equally undone by a similar Deus Ex Machina.

Faking the Dead has its own trope.

The character's resurrection from the dead could result in a situation of Unwanted Revival.

Examples of Back from the Dead include:

Eventually he asks the Leader to bring her back from the dead. And the Leader does.

]]. From the time that he says in the opening, "This is the story of how I died," it only leaves the viewer guessing until the climatic part, when he is fatally stabbed In the Back by Mother Gothel's dagger and, rather than let Rapunzel risk her freedom for his life, cuts off her hair with a broken mirror shard in a Heroic Sacrifice before breathing his last in her arms. Thankfully, Rapunzel's magic tear brings him back to life. This is justified, since in the original tale, Rapunzel healed her beloved prince's eyesight with her tear.

Retrieved from "https://allthetropes.org/w/index.php?title=Back_from_the_Dead&oldid=1964897"
Categories:
Cookies help us deliver our services. By using our services, you agree to our use of cookies.