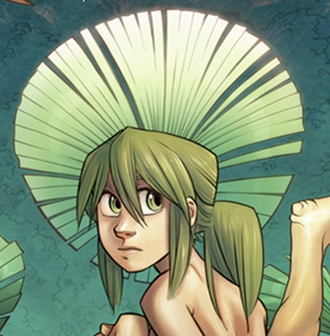 It's just a frond. Lots of those in a jungle.

A Holy Halo has a lot of symbolic value attached to it, chief among them being saintliness, purity, and status as The Chosen One. Sometimes however, it just isn't appropriate to the Genre for a character to sport an actual Holy Halo, even if it's very appropriate for them as a character at a given moment in a story. What's more, it's also very obvious, which is not always a good thing.

What artists and storytellers often resort to is using a Background Halo, a stylistic visual technique where a character's head will be put in front of something shiny or below a circle or oval. It benefits from being fairly subliminal and subtle. Well, provided directors don't turn on the Holy Backlight Up to Eleven. Then it's just silly, and possibly blinding.

Of course, that this can be done with clever object placement and positioning or elaborate costuming means that a character may invoke this trope to give themselves an imposing and messianic aura.

Examples of Background Halo include:

Retrieved from "https://allthetropes.org/w/index.php?title=Background_Halo&oldid=1711300"
Categories:
Cookies help us deliver our services. By using our services, you agree to our use of cookies.