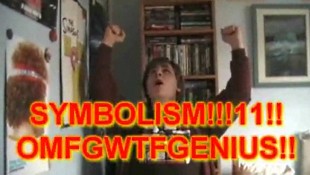 A snarky young Brit, Mathew "Film Brain" Buck hosts "Bad Movie Beatdown" on That Guy With The Glasses. By his own admission, Buck is following the Nostalgia Critic's example, but there's nothing nostalgic about the crap he reviews. Before he became a video contributor, Buck wrote articles for the site and was (and continues to be) a moderator on the forums.

See his TGWTG page, and his blip.tv page.

Tropes used in Bad Movie Beatdown include:
Retrieved from "https://allthetropes.org/w/index.php?title=Bad_Movie_Beatdown&oldid=1912100"
Categories:
Cookies help us deliver our services. By using our services, you agree to our use of cookies.