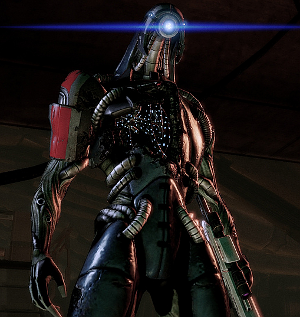 We do not experience fear. But we understand how it affects you.

Robots are as varied as their creators. Occasionally, they're allies; in many others the opposite holds true. Regardless of their morality or design, robots often follow the Rule of Cool. Given the opportunity, many tread over the line from being merely "cool" to being completely Badass.

All types of robots are covered under this trope, but an individual who is primarily human but possesses cybernetic or electronic implants doesn't count. The easiest test to determine whether or not a character belongs here is by observing if they have a mechanical "brain". If so, they're an Automaton.

Examples of Badass Automaton include:

Retrieved from "https://allthetropes.org/w/index.php?title=Badass_Automaton&oldid=1784360"
Categories:
Cookies help us deliver our services. By using our services, you agree to our use of cookies.