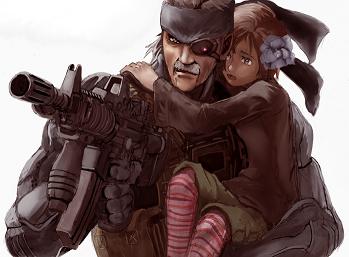 If you want the girl, you gotta go through him. Have Fun.

The Badass and Child Duo in its purest form, occurs when a (usually) male badass takes it upon himself, out of goodness, interest, or circumstances beyond his control, to protect an orphaned, unrelated young (usually) girl.

The Badass and Child Duo is made up of two parts:

If they are not the main characters, their meeting will have taken place off-screen before the story even started. If main characters their meeting will take place very early in the story, and their relationship will develop almost instantly into a Promotion to Parent Papa Wolf (or Mama Bear if the Badass is female) or Big Brother Instinct and an adopted child/sibling. Assuming heterogeneous genders, if the child is a little older (tween-age) the child may develop a Precocious Crush which is usually not returned (although in the future it may be).

Gender inverted versions and same-gendered version occur, but the pure version is the most common. This is probably because of their effectiveness at being foils of one another. Females are generally expected to be physically weaker and "purer" then men, and as a youth or child, the vulnerability given off to the audience is enhanced Up to Eleven. This juxtaposed with the adult, physically strong male who is in some way broken by their dark past of terrible sins, is a potent contrast.

Please don't mistake this trope for Papa Wolf or Mama Bear. To see the differences, please refer to the Analysis page.

Not to be confused with Badass and Baby, when a hero fights while holding a baby, usually to underscore how badass and heroic he is.

Examples of Badass and Child Duo include: