Everything About Fiction You Never Wanted to Know.
< Bakuon!!
Jump to navigation Jump to search 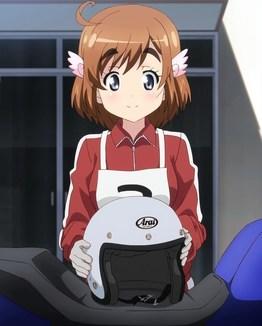 The main character of Bakuon!!, Hane is an apparently ordinary high school girl, but becomes enamored of motorcycles when she spies Onsa riding her cycle to school. She immediately seeks out and joins the biking club at her school, then throws her heart into getting both a license and a motorcycle. Along the way she ends up making new friends and going on previously unexpected adventures. Including receiving the Holy Grail from Jesus on the road to Aomori.

For all that she's sixteen, Hane is a complete innocent, with even the broadest and most obvious dirty jokes and sexual references passing entirely over her head.

Tropes exhibited by Hane include: 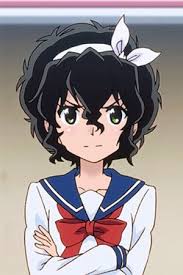 The closest this series gets to a nasty, badass biker. Like most of the other girls, Onsa is sixteen, and she thinks she's a lot tougher and meaner than she really is. In fact, she's almost as innocent as Hane, but she grew up around motorcycles and has a certain amount of biker in her blood as a result, making her a bit on the rough and crude side. It makes for an odd combination. She's an enthusiastic, if not always terribly eloquent, advocate of motorcycles and biking in general; it's her encouragement (as casual as it was) that pushed Hane over the edge from "curious about bikes" into "must have, must ride".

Her family owns a motorcycle shop, but it specializes in junker bikes with their odometers turned back, and isn't an authorized dealership for any manufacturer as a result. She seems permanently poised between accepting and embarrassed by this.

Tropes exhibited by Onsa include: 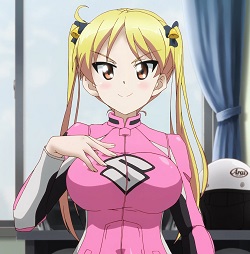 Blonde, busty and a complete Suzuki snob -- this is Rin. Like Onsa, she grew up around motorcycles -- in her case her father's Suzuki Katana.

And all the accidents he got into while riding it.

Despite a history that seems just a little worse with every Flash Back we see, Rin is an almost obsessively dedicated motorcyclist, but has clearly lost all respect for her father, from whom she gained her love of biking. She doesn't have much respect for anyone else, either, taking several episodes just to officially join the biking club despite hanging with its members and even going on a trip with them; she sometimes seems to want to be both a solitary biker making her own way through the world and The Leader of the Pack. That she's not the Leader seems to grate on her -- as does the fact that nobody respects how obviously superior Suzuki motorcycles are compared to anything else on the market.

Tropes exhibited by Rin include: 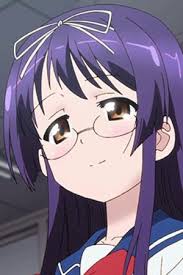 Hijiri is the sweetest girl in the show, and even more innocent in her own way than Hane. Heiress to the Minowa Group -- a powerful conglomerate of unspecified (but apparently large) size and power -- she appears to have been a Lonely Rich Kid until she discovered the biking club. She's not old enough to get a license yet, but she gets around that by having her butler, Hayakawa, drive the motorcycle while she sits in its sidecar.

Hijiri's major quirk is that she is a very proper and polite young lady who wants to be a delinquent, and thinks that by joining the biking club (and beating everyone at a game of "chicken") that she is finally a "bad girl". She takes such an innocent delight in thinking that she's now a delinquent that no one else in the club seems inclined to disabuse her of the notion. Despite this, she does seem to be a bit of an (unintentional) snob, sometimes almost reflexively looking down on the other club members.

Tropes exhibited by Hijiri include: 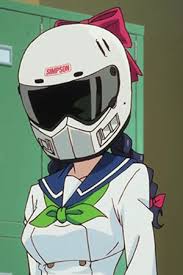 A faceless, voiceless figure of mystery, Raimu was the only member of the biking club until Onsa and Hane together went looking for it. They and the other girls all assume Raimu is an upperclassman, but the truth is she's a bike racer who's at least in her thirties (and maybe older), and has been asked by the principal of the school to watch over the biking club. She never speaks, and she never takes off her helmet, and her history is Shrouded in Myth. Every few episodes we find someone older who calls her "sempai" and knows of her from past association, and who reveals more about her almost legendary past. Oddly, though, she never seems out of place or uncomfortable spending all her time with schoolgirls who are so much younger than she is.

Tropes exhibited by Raimu include: 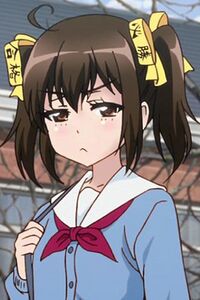 A freshman student who enters the school at the start of the next school year, she is the daughter of a famous motorcycle racer and is herself a champion minibike racer. She is 144cm (4'8.5") tall, and very sensitive about her height; she initially refuses to have anything to do with regular motorcycles because she's too short to reach the ground from standard seat heights. She does not want to admit this, though, and regularly avoids anything having to do with regular motorcycles, sometimes even resorting to a stream of lies and justifications. Oddly, she is absolutely convinced that the height of a motorcycle seat is absolutely critical to its performance, being carefully calculated by the manufacturer for optimal position, and initially resists the idea of customizing a bike in any way to make it easier for her to ride.

She is recruited by the bike club not for her racing skills, though, but simply because she already rides -- even though she lacks a street license.

Tropes exhibited by Chisame include: 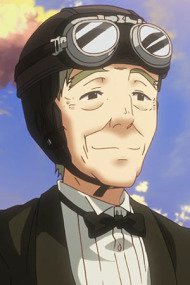 Hijiri's butler and driver. Little is known about him, although the picture that is slowly forming seems to depict a Retired Badass. Among other things, he makes asides that indicate he was part of the Siberian Internment, in which the Soviets held surrendered Japanese soldiers after World War Two in the Siberian gulags. Which would make him at the very least ninety years old. And one serious survivor.

Tropes exhibited by Hayakawa include:

Retrieved from "https://allthetropes.org/w/index.php?title=Bakuon!!/Characters&oldid=1933631"
Categories:
Hidden category:
Cookies help us deliver our services. By using our services, you agree to our use of cookies.