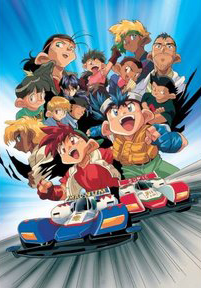 Bakusō Kyōdai Let's & Go!! (The Racing Brothers! Let's & Go!!) is a 1991 manga and anime series produced by Tetsuhiro Koshita in order to promote Tamiya's mini 4wd toyline. A Spiritual Successor of Dash Yonkuro Dash! Yonkuro. It did not get an export to America or being very well known compared to other series, but Let's & Go!! was a responsible for mini 4wd trend in several contries in Europe and Asia, including Indonesia, Philippine, Italy, China, and Thailand. The story lasts three seasons: Let's & Go!, WGP, and MAX, which is a sequel to the second season featuring new protagonists and story. Bakusō Kyōdai Let's & Go!! remains a Cult Classic for many people.

The stories follows the mini-4wd racer siblings, Retsu and Go Seiba, who are different as day and night receive a couple of prototype racing machines, Sonic Saber and Magnum Saber, by the mini 4wd recearcher Professor Tsuchiya, under a condition that they will enter and win a series of mini-4wd national competition, but things appear to get worse when Prof. Tsuchiya's rival, Prof. Ohgami, a researcher who believe in the idea that racing is to destroy other cars. He send his representatives to bring chaos into 4wd racing society by turning them into battle races. Retsu and Go, along with friends and rivals they meet along their racing careers, struggle against the new trend of vicious racing to prove that the true mini-4wd racing should be the way it used to be.

The second season, WGP, is a direct sequel where The Seiba siblings and their friends are elected into a first international mini-4wd granprix in Japan. The Japan's reprentative, the TRF Victorys, led by Retsu Seiba, enter the granprix and meet many racers from around the world.

The final season, MAX, follows Gouki Ichimonji, a student of Borzoi racing school, where for the students, mini 4wd racing is to battle and destroy each other. Gouki gets sacked for not using his machine, Max Breaker, for battle racing. Gouki leaves the school and his younger brother Retsuya behind and stays with his uncle. In Gouki's racing career as, he meets Marina, a mysterious and serious girl who owns a vicious racing machine, Fire Stinger. The story follows the journey of Gouki, Retsuya, Marina to have a triumph over Borzoi academy and their immoral ways of racing.

Tropes used in Bakusou Kyoudai Let's & Go!! include:
Retrieved from "https://allthetropes.org/w/index.php?title=Bakusou_Kyoudai_Let%27s_%26_Go!!&oldid=1962330"
Categories:
Cookies help us deliver our services. By using our services, you agree to our use of cookies.