Everything About Fiction You Never Wanted to Know.
Jump to navigation Jump to search
/wiki/Bal-Sagothcreator 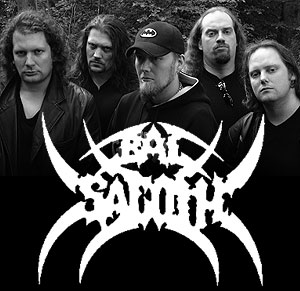 Bal-Sagoth are a symphonic extreme metal band from Yorkshire, England, formed in 1993.

Bal-Sagoth began as a black metal band with more fantastic themes than usual in the genre, and mixed more and more elements of power metal in their music as they recorded new albums. Their lyrics are Dark Fantasy, Science Fantasy and Horror based, taking part in a Verse created by vocalist Byron Roberts and strongly influenced by Robert E. Howard and H.P. Lovecraft. Their name is taken from the Robert E. Howard short story The Gods of Bal-Sagoth.

Hearken, sons of the glorious Empire...
Here we stand upon the Field of Blood...
Though this day we may die,
Our legend shall live forever.

Hearken, the clarion is upon the winds,
now the call to arms is upon us all.
The glory of battle is nigh at last.
Our banner shall fly this day in victory!
My warriors, a legacy shall this day be wrought by our blades.
Decreed by the gods, blessed by the blood of vanquished foes.
Our destiny beckons...