Everything About Fiction You Never Wanted to Know.
(Redirected from Bald Of Evil)
Jump to navigation Jump to search 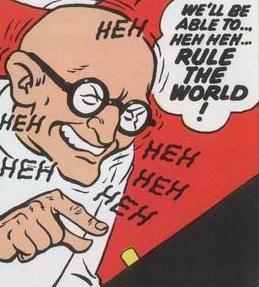 In fiction, baldness often equates with lack of moral fortitude. Many, many villains are recognised as such by the audience by their shiny, shaven noggins. It might be the Corrupt Corporate Executive in a political thriller, the sinister evil sorcerer, unholy priest, cult leader, or Evil Overlord in sword-and-sorcery, or a thuggish Giant Mook readying to crack the hero in two. However, it is most commonly applied to the Evil Chancellor and the Mad Scientist.

Where the hero has his flowing golden locks or a boyish, tousled mop of Redheaded Hero or brown hair to indicate his youthful purity, something about the complete absence of hair makes a bald villain look particularly nefarious, especially while he's slouched on his throne, steepling his fingers and delivering a Breaking Lecture while the ominous backlight shines off his gleaming chrome-dome.

This might be a throwback to ancient belief in hair as a symbol of health and virility, as exemplified by the Biblical story of Samson; it may also be more primal still, as a shaven head more closely resembles a skull and, combined with the natural tendency for us to lose our hair as we grow old, is therefore symbolic of aging and death. As a matter of fact, in ancient Rome, baldness was considered a gross deformity. Somehow, that didn't stop the very bald Patrick Stewart from being called "The Sexiest Man on TV" in 1992.

Whatever the original reason, Hair Hates Evil, and about the only times you'll see a kind and moral character without his (or her) hair will be when it's an egg-headed Smart Guy (who's probably also in a wheelchair), a Buddhist monk, a Bald Black Leader Guy, or the Littlest Leukemia Patient.

The only other good guys who go shaven are Badass Anti Heroes, so if a hero shaves his head as part of an Important Haircut, it is a sure sign he's about to get Darker and Edgier.

The tendency is, indeed, for the moral decay of a character to be inversely proportionate to the length of their hair, with innocent, virginal princesses practically drowning in their romantically flowing locks while the hard-bitten Badass sports a spiky military crewcut. The most frequent aversion of this trope is the White-Haired Pretty Boy, whose usually long and luscious tresses exist as a symbol of his evil, not in spite of it.

For the ultimate combination, supply a bald villain with a villainous goatee. This trope is also a function of Good Hair, Evil Hair.

Taking this trope way beyond its logical extreme, occasional very mad scientists will also shave off their skin and the top of their skull, leaving their brains completely exposed.

For aversions, see Bald of Awesome.

Examples of Bald of Evil include:

Retrieved from "https://allthetropes.org/w/index.php?title=Bald_of_Evil&oldid=1927748"
Categories:
Cookies help us deliver our services. By using our services, you agree to our use of cookies.