Ballad of a Shinigami 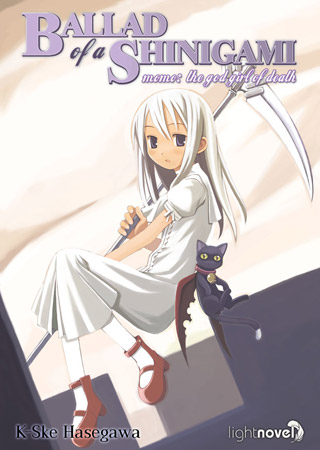 Ballad of a Shinigami is a Light Novel series that was adapted into a six-episode Anime in 2006.

The story is primarily about Momo, a Shinigami that looks like a white-haired young girl. She is a different sort of shinigami: While she still leads souls to the other side, she tries to ease the suffering of both the living and the dead she encounters. Her companion is Daniel, a small cat that follows her. The other shinigami is An, who looks like a young girl, but she dresses in all black and is cruel, with no sympathy to the souls she takes. Most of the series centers on Momo and Daniel and the people they both heal and take away.

A 12-episode TV drama was also made. It's a sweet and sad story that's fairly short but worth your time.

Tropes used in Ballad of a Shinigami include:
Retrieved from "https://allthetropes.org/w/index.php?title=Ballad_of_a_Shinigami&oldid=1282347"
Categories: