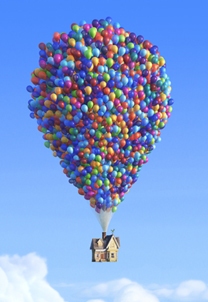 Five balloons will lift a dog, twenty a person... and a few thousand a house.

A common occurrence in children's stories and comics is having a character be lifted off his feet and into the air by a bunch of helium balloons. A variation is to have him achieve lift with plain air balloons, even though that's even less plausible.

This is a Trope Examined by the Mythbusters. See under "Real Life examples" below.

See also All Balloons Have Helium when a character simply blows up a balloon with his/her breath and it automatically floats.

Not to be mistaken for Balloon Belly.

Hannibal: Murdock, how'd I ever let you talk me into this?
Murdock: I don't know: I have intermittent memory loss! *floats away cackling*

"Well, I've already got some balloons, but...they're not this nice. Deal!"