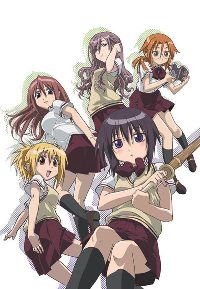 Note: This is not a trope about the shinai, a bamboo practice sword used in Kendo practice (See Nerf Arm or Wooden Katanas Are Even Better for that). You will, however see quite a few of them in this series.

Kendo instructor Toraji "Kojirou" Ishida was down on his luck. Stuck in Perpetual Poverty, he could barely make ends meet. Then there was a ray of hope. If he could assemble a team of female kendo students to defeat his old friend's team, he'd get free food for a year. Now he just has to find the team. Find it he does, in the form of Tamaki, a young prodigy. The rest of the team is equally eccentric. So begins Bamboo Blade, a surprisingly well-done kendo anime mixed with Day in the Life moments to create something greatly entertaining. The characters sell the show.

Based on a manga by Masahiro Totsuka. There is a Spin-Off with all-new characters, Bamboo Blade B.

Tropes used in Bamboo Blade include:
Retrieved from "https://allthetropes.org/w/index.php?title=Bamboo_Blade&oldid=1748385"
Categories: