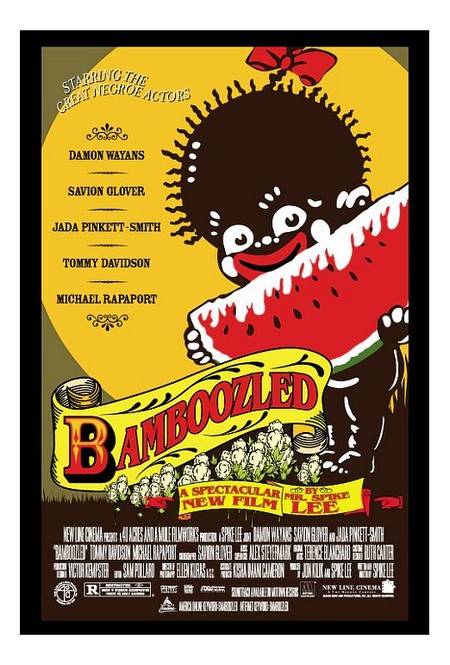 Bamboozled (2000) is a satirical film directed by Spike Lee.

Pierre Delacroix (Damon Wayans) is a Harvard-educated African American man, working for a television network known as CNS ("Continental Network System"), who's feeling a bit pissed. His boss, Thomas Dunwitty (Michael Rapaport), is a whigger who insists he is more black than he is, and who dismisses all the intelligent shows about African Americans that Delacroix proposes as knockoffs of The Cosby Show. Delacroix believes that all Dunwitty wants are shows portraying African Americans as buffoons. Frankly, he'd just like to leave, but he's contractually bound to the network. In order to get himself fired, and to satirize the network's desire for buffoonish black people, Delacroix concocts a brilliant plan: he comes up with a televised minstrel show called Mantan: The New Millenium Minstrel Show, in which two black street performers portray goofballs named "Mantan" and "Sleep 'N Eat" on a watermelon plantation in blackface makeup. Dunwitty, sure enough, greenlights the show.

To Delacroix's horror, the show is a huge success.

Tropes used in Bamboozled include:
Retrieved from "https://allthetropes.org/w/index.php?title=Bamboozled&oldid=1764173"
Categories: