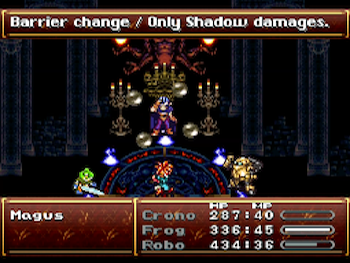 A type of boss, typically in an RPG, who doesn't have a fixed place in the game's Tactical Rock-Paper-Scissors lineup, who uses a special technique or ability to periodically shuffle his elemental weaknesses, in order to keep the player guessing. The boss is also usually a powerful spellcaster (impying that his special barrier-change technique is a high-level boss ability), and often has a significant role in the surrounding story.

It may or may not be possible to use an Enemy Scan on this type of boss—even if the scan does tell you his weakness, that will be subject to change in a few turns when he changes it again (assuming the boss doesn't react to your scan by changing his weakness immediately). On the other hand, sometimes you can quickly identify the boss's current weakness—sometimes the invocation will explicitly tell you which element to use, or the current weakness may be Color Coded for Your Convenience (e.g. if the boss has Deflector Shields).

Examples of Barrier Change Boss include:

Retrieved from "https://allthetropes.org/w/index.php?title=Barrier_Change_Boss&oldid=1586090"
Categories:
Cookies help us deliver our services. By using our services, you agree to our use of cookies.