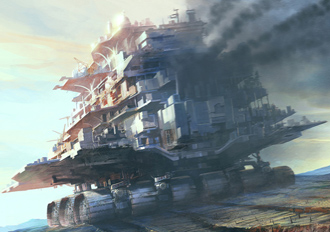 One of the craziest ways a villain can keep their base hidden is to keep it moving constantly around the country. Of course, there's no way your typical Elaborate Underground Base will fit into the average mobile home, (unless it's bigger on the inside than the outside) but rather than compromise and throw away the Shark Pool, the villain will put his base in an overly large truck or train.

Typically, this vehicle is armour plated and two or three lanes wide, and as a result can just careen straight down the middle of the road/railway ignoring low bridges, other cars and especially the dreaded toll booth—there's almost always a scene of the toll-booth and a few other cars exploding spectacularly as they drive through. The vehicles are also much faster than their real-life equivalents—the lorries that carry fully-furnished buildings can barely make twenty five miles per hour, on straight, clear roads with police escorts. This of course gets even sillier if the villain does not scrimp on the size of his mobile base, resulting in mountain-sized machinery zipping about.

There have also been cases of armoured trains in real life; during the Second World War both the Russians and the Germans used heavily armoured locomotives and wagons, sometimes even using spare tank turrets to give additional firepower, and artillery trains have been used as late as the war in Croatia in the 1990s. See also the Military Mashup Machine known as the Land Battleship, which is usually one of these, too.

This trope is for land vehicles only. For bases hidden in boats or flying vehicles, see Cool Boat, Cool Airship, and Cool Spaceship. Also compare Mercurial Base, a subtrope dealing with bases on extremely hot planets.

Examples of Base on Wheels include:

Retrieved from "https://allthetropes.org/w/index.php?title=Base_on_Wheels&oldid=1891772"
Categories:
Cookies help us deliver our services. By using our services, you agree to our use of cookies.