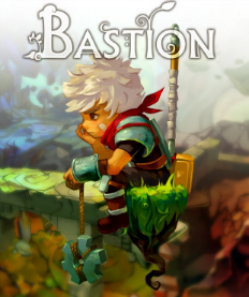 Bastion is an Action RPG hybrid developed by Supergiant Games and published by Warner Bros. Interactive Entertainment, and is the first game released for the Xbox Summer of Arcade 2011 event.

The world has been torn to pieces by an event known only as "the Calamity." The main character, known only as "The Kid," reaches the Bastion (an emergency gathering place), where he learns things can be set right if the Bastion's cores can be gathered to power it. Thusly motivated, he heads off to gather the cores.

This game is full of surprises, and even the barest reading of this page will spoil portions of the game for you. Be warned.

Tropes used in Bastion include:
Retrieved from "https://allthetropes.org/w/index.php?title=Bastion&oldid=1684995"
Categories: