Everything About Fiction You Never Wanted to Know.
< Batman: Arkham City
Jump to navigation Jump to search 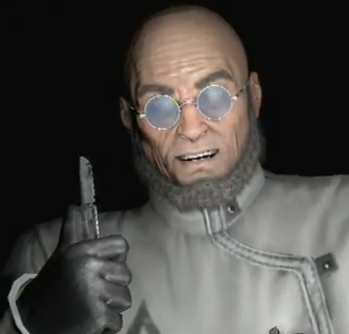 Batman: Arkham City turned everything about the first game Up to Eleven, and the Sequel Escalation includes anything you can think of. Asylum was dark, City is darker. Asylum was scary, City is worse. Read and weep.

Penguin: [blows up a bridge] "See, I told you it would work. Blow up the bridges and cut off the clown's forces. Easy."
Thug: "But Mr. Cobblepot, we're stuck too!"
Penguin: "So?"
Thug: "We can't get back!"
Penguin: "And your point is?"
Thug: "You've left us here with Joker's crew!"
Penguin: "Try an' take some of 'em down before ya die, son!" [disconnects]

Calendar Man: "I wasn't real close to my dad, and after my first internment at Arkham we never spoke at all. Seems he wrote me off as a wacko, a loser. So after I was released, I wanted to clear the air between us. The next Father's Day I dropped by his place and suggested we go fishing. You ever go fishing with your pop? Well, it's some fun, let me tell you. The two of us, out on the water, pulling in one whopper after another. Of course, I was doing the actual pulling. Dad was baiting the hooks. You know, with a finger, a foot, an eye... whatever I had left of him. Even today, whenever I eat a nice piece of fish, I feel closer to my dear old dad."