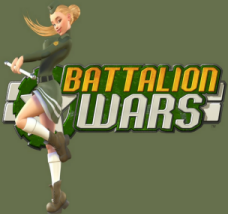 A Spin-Off game of the Nintendo Wars series released on the Nintendo GameCube. Unlike the other games in the series, this one eschews Turn-Based Strategy for a Real Time Strategy/Third-Person Shooter mix somewhat similar to Hogs of War. You direct your units around the battlefield, but do it from the point of view of any individual unit on the field, which you also control in battle.

The series involves a world with surprisingly trigger-happy nations. The two largest, the Western Frontier and the Tundran Territories, are in a state of cease-fire after a long war, and things seem to be heating up between them yet again. As the bullets and bombs fly, all countries involved get embroiled with the Iron Legion, the former army of Xylvania that nearly conquered the world centuries ago, is more than willing to give it another shot, and isn't about to let a little thing like being dead stop them.

A sequel, Battalion Wars II, was released on the Nintendo Wii. In BWii, the Anglo Isles, who managed to stay out of the previous conflict, invade the Sol Empire on rumors that they were building a superweapon to use against them (Given that they built the superweapon that stopped the Iron Legion, this wasn't too hard to believe). Eventually, the Frontier and Tundra get involved in the action as well.

Tropes used in Battalion Wars include:

Vlad: Why do you care about this trifling town? Everything of value is destroyed. No matter. Launch Acid Gas vets!