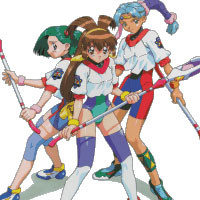 A series of Bishoujo / sports anime produced by AIC in 1997.

The two anime series were released by Pioneer in North America as Battle Athletes (the original OVAs) and Battle Athletes Victory (the TV remake). Both star Dojikko Akari Kanzaki, the daughter of the legendary athlete Tomoe Midoe, as she strives to join the University Satellite sports competition, where she and dozens of others will compete in a variety of futuristic sports, to see who is Earth's greatest female athlete and champion -- the "Cosmo Beauty".

Tropes used in Battle Athletes include:
Retrieved from "https://allthetropes.org/w/index.php?title=Battle_Athletes&oldid=1513516"
Categories: