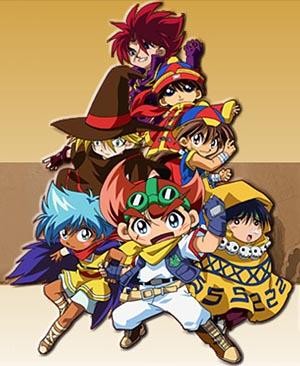 Battle B-Daman (B-伝説! バトルビーダマン Bī-Densetsu! Batoru Bīdaman?, "B-Legend! Battle B-Daman") was a manga series by Eiji Inuki which ran in CoroCoro Comics by Shogakukan from 2002 to 2005. It was about a boy named Yamato Delgado who wants to become the best at a game called B-Daman. Yamato obtains a special B-Daman "blaster" named Cobalt Blade, which an evil organization called the Shadow Alliance plans to steal.

A Merchandise-Driven anime was created and it first aired in January 2004 in Japan, replacing Explosive Shoot Beyblade G Revolution in its 18:00 timeslot. It premiered in the United States in April 2005. Like its predecessor, it was themed around an enhanced version of a children's schoolyard game – whereas Beyblade was based around spinning tops, Battle B-Daman is a dramatized version of marbles. It is the first show of the B-Daman series to be dubbed in English.

In Japan, it aired on TV Tokyo. In the United States, it once aired on ABC Family and Toon Disney's JETIX block. At one point, as well as G4 in the USA, but on the latter was replaced by G.I. Joe: Sigma 6 soon after. In Canada, it airs on YTV, in which on February 2007, the second season (entitled Battle B-Daman: Fire Spirits) commenced with a completely new voice cast, and what some have called inferior dubbing from the first season; the French dub of the show airs on Télétoon. In the India, it airs on DD National and Zee TV and the first few episodes are currently available through DD Kashir TV on demand service. The toys were originally made by DD India and were released by Hasbro in United States.

In Japan, Battle B-Daman: Fire Spirits! was superseded by Crash B-Daman, a new series with an all new cast and story.

The manga is published in English by Chuang Yi.

Tropes used in Battle B-Daman include:
Retrieved from "https://allthetropes.org/w/index.php?title=Battle_B-Daman&oldid=1448711"
Categories: