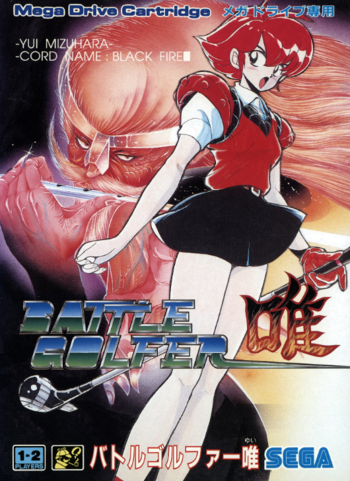 Battle Golfer Yui is a Sega Genesis game released exclusively in Japan around 1991, but it received a Fan Translation in 2017 by Supper and filler. It was developed by Santos and published by Sega. The plot is about Dark Hazard, a mysterious organization led by evil scientist named Professor G. His plan to take over the world with Battle Golfers, cyborg minions who excel in golf. Two girls Ran Ryuzaki and Yui Mizuhara are his next victims. Before he could successfully turn Yui into his minion, a savior comes in and saves Yui.

This game was played on Game Center CX.

Tropes used in Battle Golfer Yui include:
Retrieved from "https://allthetropes.org/w/index.php?title=Battle_Golfer_Yui&oldid=1911906"
Categories:
Cookies help us deliver our services. By using our services, you agree to our use of cookies.