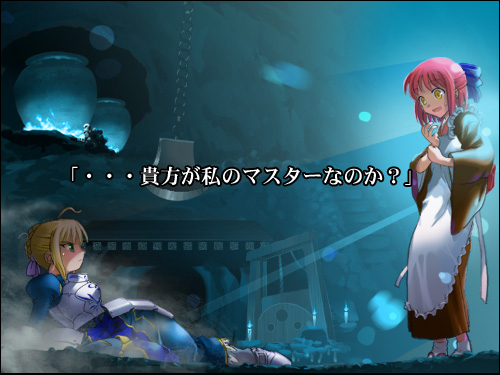 Battle Moon Wars is a Doujin game made by the group Werk. It is, as the name suggests, a Pastiche in the style of Super Robot Wars.

Take the three major facets of the Nasuverse: Tsukihime, Fate/stay night and Kara no Kyoukai. Then mix them together into a Massive Multiplayer Crossover, and add a duo of original characters on top. Through four acts, what starts as a not-so simple maidnapping explodes into a new Grail War, as one by one, a mysterious enemy is bringing back defeated villains from Nasuverse past, with shiny new power boosts to boot.

Battle Moon Wars is notable for successfully blending Nasuverse canon together, and pulling together a unique story of its own (Word of God about power levels—or several of them existing together—be damned!). Yes, even Phantasmoon stealing her staff from Caster is from the official artbooks.

Translation Patch so far can be found here.

Kuu: Haruna, I leave everything in your care.