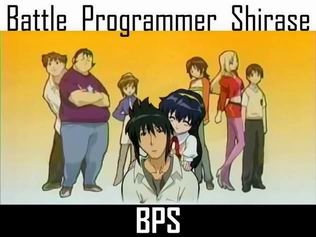 Battle Programmer Shirase, also known as BPS, is a comedy anime series about Akira Shirase, a computer nerd who lives on his own in an apartment owned by his niece. He is also a world-famous rogue programmer with super hacking abilities who doesn't work for money, though he will occasionally work for rare computer hardware and other otaku treats. His great-niece Misao lives next door, feeding him and providing plot complications as needed.

Ran for a single season of 5 episodes, broken into 3 segments of 10 minutes apiece.