Everything About Fiction You Never Wanted to Know.
< Battle Spirits: Shonen Gekiha Dan
Jump to navigation Jump to search

A hot-blooded and bluntly straightforward red card battler. During a championship, he was taken into the world of Grand Rolo by Yuuki and Kajitsu Momose, where he was known as the red soldier, a bearer of the core’s light. He befriends Zungurii, a native child whose village was under attack, and devotes himself to saving Grand Rolo for the sake of Zungurii and the rest of the Otherworlders.

In the second season, Dan travels to the future in order to battle again, and protect the humans from mazoku, and the planet's eventual reset. Now using a deck of all colors, he becomes a Brave user. In the end, he makes a Heroic Sacrifice by becoming the trigger to summon the gods and prevent the Earth's reset. His fate is left in question.

A yellow card battler (and the yellow soldier) known as “The Noble Youth of Light.” He loves to be around girls (be they living or the spirits in his deck), and devotes himself to protecting the ladies of Grand Rolo. At first, he dislikes Dan, but the two become very close friends, learning a lot from the other’s different battle style.

In the second season, he's the captain of The Beautiful Sophia. He doesn’t battle as much anymore, leaving that task to Dan. When he does, however, he now uses red cards as well as his usual yellow. In the end, he chooses to stay in the future, to protect it in Dan's place, and to be with Angers.

A purple card battler (and the purple soldier), and well known net idol for her blog, “Purple Talk.” She tends to act rather spoiled, being pampered by both Zungurii and her butler, Serge. When serious, however, she puts others before her, and is described as “scary.” She develops feelings toward Dan over time.

In the second season, Mai has changed very much. She’s quit her blog, started using her real last name, grown her hair long, and no longer battles. Though she begins the series as a member of the Sophia crew, she temporarily leaves to join Barone in fighting for the mazoku.

A blue card battler (and the blue soldier), and dedicated card collector. He loves X-rares in particular, and will do whatever it takes to add more to his collection. He’s rather unsociable, and is disinterested in being the blue soldier. He later becomes a temporary king of the blue world, and is reluctant to leave that position, both because it’s a huge contrast to how he used to be bullied in the real world, and because he feels too different from the other core soldiers, as he doesn’t fight for anyone but himself.

In the second season, he doesn't appear at first, as he was traveling the world on his own. He later realizes his role, and comes to the future to help out.

A white card battler (and the white soldier) on the side of Otherworld King. He is one of Otherworld’s Three Heads, alongside Leon and Pantera. While appearing cold and cruel, he is very close to his younger sister, Kajitsu, dedicating himself to protecting her. When he realizes his plans are hurting her more than helping, he leaves her in the hands of the other core soldiers and later decides to fight alongside them. Though human, Yuuki is actually the reincarnation of the white world’s king.

In the second season He doesn't appear. Instead, his reincarnation, Zolder, plays a role.

A green card battler, and the younger sister of Yuuki. She possesses mysterious powers, which she uses to send Dan into Grand Rolo. She at first comes off as rather emotionless. Kajitsu actually bears the light of Mother Core. Because she controls this great power, it causes a lot of strain on her body. She is deeply devoted to Yuuki because she’s actually the reincarnation of the green world’s princess, Yuuki’s lover in a past life. 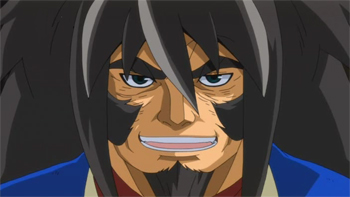 The ruler of Otherworld. He was enslaving its inhabitants so that they would construct Horizon Ladders. He possesses great powers and sees himself as vital for the existence of Otherworld. He was once an explorer, who found Grand Rolo by chance and wanted to colonize it. He was mocked for his ideas, and began to hate humanity for the way he was treated. He planned revenge on the rest of the humans, whom he believed hadn't progressed as far as himself. 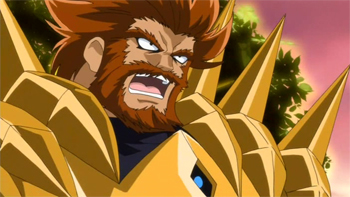 Leon is one of Otherworld’s Three Heads. A very powerful card battler, who uses a hybrid deck. After Kajitsu is left with the core soldiers, he makes numerous attempts to re-capture her. Leon actually comes from the past. 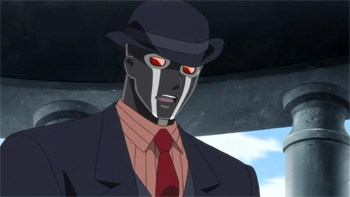 One of Otherworld’s Three Heads. Pantera was actually built by Otherworld King. Recorded within him is the data from past battles in Otherworld, making him aware of most strategies imaginable. He believes his only weakness is that he lacks a heart. Because of this, he loses to Dan. Dan considers him a friend, and believes that he can become like a human. In truth, there are multiple robots like Pantera. Each is the true Grand Core for one of the colored worlds.

A soldier who is Yuuki’s ally. When Dan first comes to Otherworld, he is attacking Zungurii’s village. Kazan comes from the future. The reason he’s loyal to Yuuki is because he resembles Kazan’s former captian. When Yuuki joins with the core soldiers, he does so as well.

In the second season, he's a commander in the war against the mazoku. 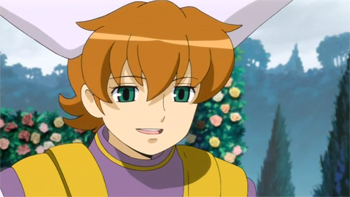 An arrogant boy from the white world, promised power by his father. He plans to be the next white king and white soldier, but is humiliated by Yuuki in battle. He later returns, joining Leon in his attempts to capture Kajitsu.

The Otherworld Witch. Although she tries her hardest to defend Otherworld before the Core Soldiers arrived, she lacks her former strength. This is because it was stolen by Otherworld King, along with her deck. Although she doesn’t look it, she’s over 4000 years old, and laments over the fact that she still remains single.

A monkey-like child who Dan meets when he first enters Grand Rolo. After Dan saves his village from attack, the two travel together, in order to free his captured family members. Although Zungurii isn’t much of a card battler, he helps the group out in any way he can, especially cooking. 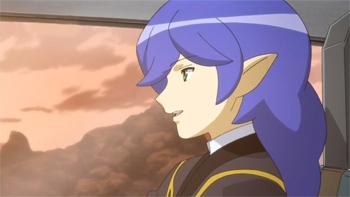 Mai’s loyal butler. He pilots The Violet. Both Serge and the Violet originally belonged to Namii, a card battler from the purple world.

A green card battler who appears at the Grand Rolo Championships. Though only a third grader, he makes it to the final round, against Dan. He is revealed to actually be working alongside Yuuki, and seeks the wish awarded to the champion for selfish means. He is also the true green soldier, not Kajitsu, as Dan previously believed. After losing to Dan, the two become friends, and he stays with the other core soldiers.

In the second season, Kenzo works as a scientist, alongside Stella. The two have somewhat of a rivalry. He doesn’t really battle anymore.

The Beautiful Sophia (and other allies)

The Beautiful Sophia’s mechanic. She’s extremely cheerful, and loves mechanical things. She tends to make up her own words. She battles Kenzo with a white deck. Though she’s highly inexperienced and loses, this makes her fall in love with him.

The Beautiful Sophia’s pilot. At first, he doesn’t like Dan much, finding him incompetent for losing to Barone soon after coming to the future. Mai and Clackey try to help him see Dan’s worth. Youth later comes to see Dan as both a rival and inspiration, wanting to become as strong as him, and someday beat him.

A scientist from the future time who works with Kenzo. She seems to like taunting and one-upping him.

Two mazoku children that were being used as hostages by humans. Dan rescues them and takes them to the Sophia. They seem to have insatiable appetites.

The mazoku leader. She believes Dan is humanity’s enemy. She’s very harsh to her subordinates, as she had Duc imprisoned for losing to Dan, and made Barone give up his territory. Later, Zazie betrays her, but her friend Lucretia gives her life to protect the queen.

A brave user like Dan. He becomes fascinated with Dan, believing he's the only opponent capable of quenching his thirst for battle. He is later deemed a traitor thanks to Zazie, and is forced to leave his territory. Afterwards, he allies with Dan for a while. He seems to be in charge of the mazoku by the end of the series.

A rather mysterious and unpredictable mazoku. He wears a mask over his face. While at first, he appeared to be manipulating things for fun, he’s shown to have more dangerous motives.

The first mazoku Dan faces. After losing to Dan a second time, he’s punished with imprisonment. He later returns as a cyborg, and with no memory of his former self. He’s has a "Brave Killer" deck, because it is especially designed to be used against Braves.

Duc’s son. He greatly respects his father. He is rather similar to Youth, and the two become friends.

A loyal servant of Barone. After he's exiled, she follows him along with Eolus. She’s very similar to Kajitsu Momose, in that she uses both Kajitsu and Yuuki’s main cards in battle, and that she can use green butterflies. This is because she's Kajitsu’s reincarnation.