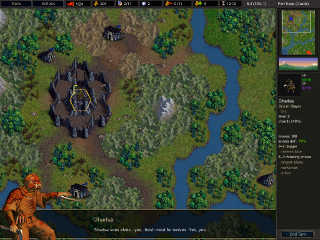 The Battle for Wesnoth is a free, open-source Turn-Based Strategy computer game, available here. It boasts heavy community development, being almost entirely developed by people who are essentially just dedicated fans. Wesnoth has a large and active multiplayer community, including a competitive ladder, with skirmishes or custom-made scenarios being the main multiplayer game types. Apart from that, there are lots of single player campaigns, both 'mainline' (i.e. shipped with the version available for download) and user-made, available from the add-on server, giving it impressive replay value for a freeware game.

It was designed to feel a lot like a console-style Tactical RPG (such as Master of Monsters and Langrisser), but while taking advantage of the PC's inherent user interface advantages. It differs from them notably by having a large luck-based component, and by being extremely well balanced. The game's setting is traditional High Fantasy, heavily Tolkien-inspired, by the admission of the dev team.

A few of the game's more major mainline campaigns are the following:

The game's community is constantly expanding upon it, by improving its mainline spec, and by developing user-made content. Numerous well-used add-ons exist, including additional campaigns and additional multiplayer eras which add new races, factions and species to the game. As with much open-source software, the game is in continual development in many aspects, including artwork and music, user interface, adding campaigns to mainline and many others.

So, welcome to Wesnoth. Enjoy!

Tropes used in Battle for Wesnoth include:
Retrieved from "https://allthetropes.org/w/index.php?title=Battle_for_Wesnoth&oldid=1631484"
Categories: