Battle of the Planets 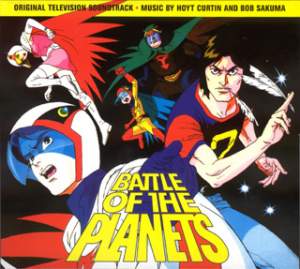 The first American version of Science Ninja Team Gatchaman. Heavily Macekred by the infamous Sandy Frank Productions. You know, the guy who dubbed the Gamera movies, Fugitive Alien, and Time of the Apes.

Battle of the Planets was one of the few anime that meets Alex Ross's approval, and some illustrations that he did for the series led to both him doing the cover illustrations of ADV Films release of Gatchaman and to a short-lived Revival comic series published by Top Cow Productions from 2003-2004, which tried to combine elements from both the original and the adaptation into a whole.

Tropes used in Battle of the Planets include:
Retrieved from "https://allthetropes.org/w/index.php?title=Battle_of_the_Planets&oldid=1758583"
Categories: