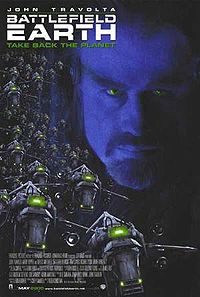 When you were still learning to spell your name, I was being trained to conquer galaxies!
—Terl

The film version of L. Ron Hubbard's Science Fiction novel Battlefield Earth was released in the U.S. in the year 2000, directed by Roger Christian and starring John Travolta as Psychlo leader Terl (he originally wanted to play the part of the book's hero, Jonnie "Goodboy" Tyler, but that role eventually went to Barry Pepper). Travolta had wanted to do the film for a long time, but had trouble securing money for it because of studios' apprehension to bankroll the film due to its connections with the Church of Scientology. He later poured most of his own money into the project and signed on as a co-producer, and the rest...well, is history.

After MGM and Fox Studios turned down offers to distribute the film, it was eventually picked up by Franchise Pictures, a company known for helping stars rescue their troubled pet projects. To this day, it has yet to gross 30 million USD--its budget was 44 million.

Has the dubious honor of winning the Razzie for Worst Movie of the 2000s.

Terl: If you rat-brains knew ANYTHING about firearms, you'd know that you never store loaded weapons!