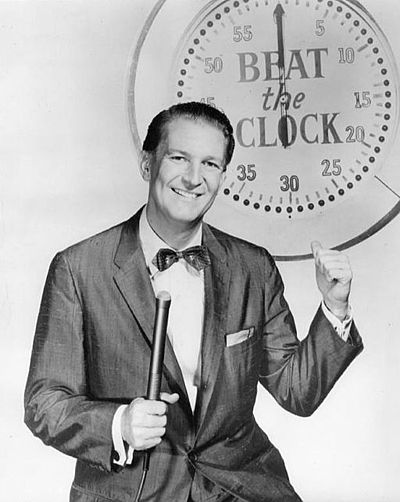 Bud Collyer on 1958's version of Beat the Clock.

Perhaps the granddaddy of stunt-based Game Shows, this Mark Goodson-Bill Todman creation has been around in some form since 1950. The premise is simple: Here's a clock. Here's a silly stunt. Can you perform the stunt before time expires? If you do so, you win.

The original version, which aired on CBS (1950-58) and later ABC (1958-61), starred Bud Collyer as host. Brought back for a five-a-week syndicated revival in 1969, the show was hosted by Jack Narz, who left in 1972 due to travel expenses eating up most of his salary. Gene Wood, then the show's announcer, was quickly promoted to host until 1974, making for one of his few non-announcing gigs. In 1979, Monty Hall of Let's Make a Deal fame hosted a one-season revival, again for CBS; this role was one of the few times he hosted a show he didn't create, and the only time he ever worked for Goodson-Todman.

PAX brought back the show yet again in 2002 with Gary Kroeger as host, and tacked on a Bonus Round copied from The Diamond Head Game. In 2006, the original Clock was part of CBS' Gameshow Marathon with Ricki Lake. Universal Kids brought the show back again in 2018-2019.

The format was exported to the United Kingdom in the 1960s, forming part of the popular variety series Saturday Night at the London Palladium. It was the first of many games hosted by Bruce Forsyth.

The following Game Show tropes appear in Beat the Clock:
Other tropes include:
Retrieved from "https://allthetropes.org/w/index.php?title=Beat_the_Clock&oldid=1799673"
Categories: