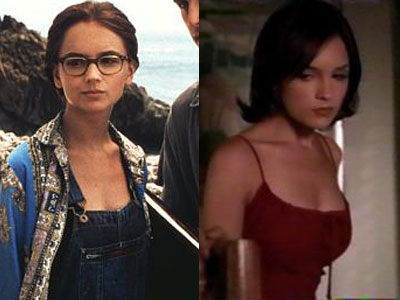 A stock plot: an ugly duckling loses the glasses, takes down her hair, maybe gets a little makeup and walks down the stairs as a swan. Pretty much the plot of the movie She's All That.

Another version of this would be "Miss Jones Syndrome", where a dowdy, bespectacled woman switches to contacts, shakes loose her hair, and is told by the unrequited object of her affections, "Why, Miss Jones, you are beautiful." (A variant on this can be heard in Thomas Dolby's song "She Blinded Me With Science": "Good heavens, Miss Sakamoto, you're beautiful!")

This is mainly possible because most of the "ugly" women on TV are beautiful actresses in bad clothes, though it also has something to do with narrow standards of beauty, particularly for women, in movies and TV.

Starts as a nice little moral about how looks aren't everything, but saves the hero from actually having to go out with an ugly girl.

Opposed by Nerds Are Sexy. See She's All Grown Up for the related prettification of a childhood friend. Contrast Just the Way You Are, Unnecessary Makeover. The trope, She Cleans Up Nicely, often differs in that the girl in question might like rough casual clothes or work gear most of the time, she knows damn well she can look stunningly good when she wants to be.

See also Suetiful All Along and Fan Service Pack. Contrast Irony as She Is Cast, where this is always the potential, but it is never tapped.

Nowadays, this trope is dead in the water, but it's still used from time to time.

Examples of Beautiful All Along include:

Retrieved from "https://allthetropes.org/w/index.php?title=Beautiful_All_Along&oldid=1891643"
Categories:
Cookies help us deliver our services. By using our services, you agree to our use of cookies.