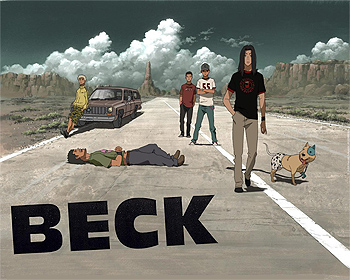 Ordinary Middle School Student Yukio 'Koyuki' Tanaka wonders if his life will ever be interesting enough to write an autobiography. This all starts to change as he steps in to rescue a frankenstein-looking dog from a bunch of pestering kids. The dog, Beck, turns out to belong to Ryuusuke 'Ray' Minami, a Japanese kid with a checkered past that was largely spent in New York in the company of a currently world-famous singer/songwriter. Ryuusuke introduces Koyuki to rock music and lends him a guitar.

Ryuusuke is also setting up a band, which eventually gets named Beck, after the dog. After Koyuki has learned to play the guitar to a somewhat passable level, he gets accepted into the band. There he impresses everyone with his fantastic voice. From then on, the whole story is mainly about Beck's struggles to become famous, both nationally in Japan and internationally. Well, that and Koyuki's romantic troubles with Ryuusuke's sister, Maho.

The other members of the band are:

Not to be confused with the alternative rock musician of the same name.

Essentially the Manga is a Seinen in Shounen's Clothing.

Tropes used in Beck (manga) include:
Retrieved from "https://allthetropes.org/w/index.php?title=Beck_(manga)&oldid=1807259"
Categories: