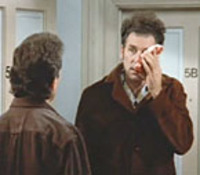 Have an injury? Just slap a piece of steak over that wound!

The Beef Bandage is when a character applies a raw, (and sometimes bloody) slab of steak over a fresh wound, commonly a black eye. It is said that the steak stops the swelling of the wound, or successfully acts as an icepack if the steak is frozen. Can be Played for Laughs if the beef bandage is later used for dinner (or if someone mentions that it was supposed to be used for dinner).

Truth in Television, although it isn't really recommended that you try it, unless the steak is frozen and sealed inside plastic wrap. Cow blood seeping into one of the most absorbent parts of your body (the eye) usually isn't good for you. You're probably better off with an ice pack.[1] The reason behind using a steak was the fact that steak in general is kind of flexible and would form to the contour of your eye socket. (Bags of frozen peas are sometimes used for the same purpose.) Nowadays, most people simply recommend a washcloth soaked in cold water.

The steak treatment may originate in ancient Greek medical theory of the "Four Humors." The beef, being red and bloody, would draw out the swelling. It didn't work, but since the treatment was fairly harmless and the cool meat might actually make it feel better, the custom persisted.

Not to be confused with Hyperactive Metabolism, though "Turkey Bandage" was proposed as a name for that.

Examples of Beef Bandage include:

Retrieved from "https://allthetropes.org/w/index.php?title=Beef_Bandage&oldid=1808687"
Categories:
Cookies help us deliver our services. By using our services, you agree to our use of cookies.