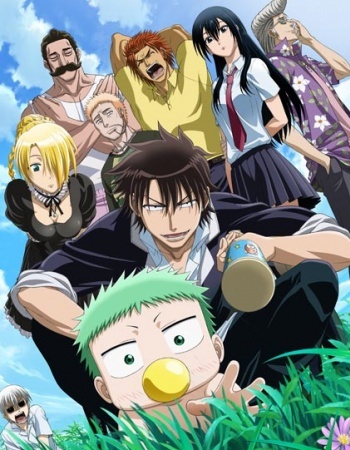 This is the story of up-and-coming young delinquent Tatsumi Oga, a first year at the infamous Ishiyama High, who one day suddenly finds himself the unintentional adoptive parent to the Demon King's son, Kaiser de Emperana Beelzebub IV (Baby Beel for short), an adorable baby boy who is destined to destroy the world. Initially reluctant to carry out his fatherly duties, Oga changes his mind when the demon nanny and "mother" Hildegarde shows up, with the news that due to their contract Oga will die if he and Baby Beel are separated and that he must face his responsibilities. Unless he can find someone even stronger to take over from him that is...

A delightfully absurd gag manga with liberal doses of action by Ryuhei Tamura, Beelzebub started out as a one-shot, and serialized in Shonen Jump from February 2009 to February 2014, and then transferred to Jump Next!! as Beelzebub Another, where it ran from May 2014 to March 2015. The plot consists mainly of Oga dealing with the problems of raising Baby Beel, while fighting his way through the ranks of troublemakers he comes across, often to hilarious results.

An OVA was shown at the 2010 Jump Super Anime Tour. The anime adaptation began airing January 2011, ending in March 2012.

Tropes used in Beelzebub include:

Retrieved from "https://allthetropes.org/w/index.php?title=Beelzebub&oldid=1855331"
Categories:
Cookies help us deliver our services. By using our services, you agree to our use of cookies.