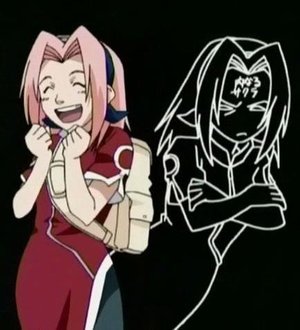 Virtually everyone has to wear a public mask in order to be accepted by others. That's a simple fact of human psychology. When circumstances (such as anonymity, strong emotion, or sufficient power) allow a character to take off that mask and act in complete accord with their inclinations, they reveal what's Beneath the Mask.

The secrets this mask hides are varied and are not always dark. A villain, for example, might be hiding a soft spot.

Sometimes a person may never know they had a hidden self before the mask comes off. The change is even a surprise to them. Other times the person is well aware of their hidden self and are determined to keep it hidden. This hidden self that people don't show to others is what Beneath the Mask is about.

Related to GIFT and What You Are in the Dark. Often used in conjunction with Jerk with a Heart of Gold, Jerkass Facade, Bitch in Sheep's Clothing, Sugar and Ice Personality, and The Proud Elite. Obfuscating Stupidity and Obfuscating Insanity can be subtropes, as can A Darker Me. Not to be confused with Hidden Depths or Rich Idiot With No Day Job, which are about skills and roles rather than personality. Compare and contrast Becoming the Mask, where the facade itself actually becomes part of the character's personality.

Examples of Beneath the Mask include:

Lampshaded by Ray, although in reference to another character.