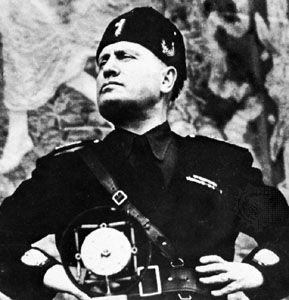 Benito Amilcare Andrea Mussolini (1883-1945) was an Italian fascist politician who was leader of Italy from 1922, pretty much up to his death. Unlike his German contemporary Adolf Hitler, he was never in official command of his nation due to King Victor Emmanuel nominally being Mussolini's boss.

Mussolini first got the idea for fascism when he was a war reporter in the trenches of World War I, following around the soldiers. And he liked what he saw in the army. He wanted to create a society organized like a military battalion, a rigid conformist society with no dissenters to undermine patriotic values.

Today, he is most famous for being the first fascist ruler of any country, and for his colonial war against Ethiopia in 1935 (called Abyssinia at the time) which proved the ridiculous incompetence of the League of Nations. He was a close ally of Adolf Hitler and fought on Nazi Germany's side during the war, although the Italian Army were more of a hindrance to the Nazis than a help. To be fair, when Hitler wanted Italy to enter the war, Mussolini said what amounted to Can it wait until I've industrialize my country in five years? (this may have been a random number chosen to delay Italian entry indefinitely...until Germany annexed half the continent with ease, at least).

That all said, there is a real historiographical debate about how much of a Fascist Mussolini really was, as the most notable members of his cabinet consisted of political opportunists rather than die-hard Fascist fanatics, and Mussolini seemed to waver a lot when the question of how far the Fascist revolution was meant to go came up, on at least one occasion saying that Italy was not ready to be Fascist. In other words he believed in Fascism, but was too cynical about Italy and politics in general to believe that a Fascist revolution could take place, and thus was content to run a straight-up dictatorship with Fascist dressing, electing to maintain his position rather than upset the status quo. Thus, Fascist Italy was not as totalitarian as Nazi Germany nor Stalinist Russia- it was a one-party state with media controlled and opposition banned and such, but it was still a monarchy, had a shaky, up and down relationship with the Catholic Church, tolerated (if not permitted) a degree of freedom of speech, and had an aggressive foreign policy that was more bark than bite.[1] Though Mussolini ruled for more than 20 years, several parts of Italy barely noticed any change from the previous fifty.

Mussolini was deposed by the King in July 1943. In September the Italians joined the Allies and declared war on Germany. The Germans responded by invading Italy and forcing Mussolini, by now wanting to retire, to form a Nazi state called the Italian Social Republic. He was caught and executed by the Italian resistance in 1945, by first being shot in the gut, and then being dragged into the nearby city of Milan and hung upside-down while crowds of angry Italians threw things at his body.

Mussolini does not come up in history quite as often as Hitler does, despite numerous of Hitler's famous actions being imitations of Mussolini's.

Basically, he was the Kamina to Hitler's Simon.