Everything About Fiction You Never Wanted to Know.
Jump to navigation Jump to search
/wiki/Benjamin Disraelicreator 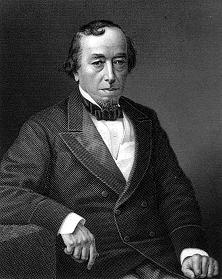 Benjamin Disraeli, 1st Earl of Beaconsfield, KG PC FRS was born Benjamin D'Israeli. Despite the fact that he converted to Anglicanism in his teen years, he remains to date Britain's only ethnically-Jewish Prime Minister. He played a key role in the creation of the modern Conservative Party after the Corn Laws schism of 1846. Despite this he was not very well liked by the other major party leaders at the time but he kept working at it and was finally welcomed in fully in the 1860s. He had a life long rivalry with William Gladstone, the later head of the Liberal party and a later Prime Minister. In order to help with this he became a close friend of Queen Victoria (he pushed through legislation that made her the Empress of India, putting her on the top tier of European royalty with Tzar Nicholas II and ensuring that she would not be outranked by her daughter when she married German Emperor Frederick III, or by the Indian nobles who still ran parts of India), which also caused her hatred for Gladstone.

Bizarrely for a Conservative government, from a modern point of view, his second government focused mostly in improving the lot and rights of workers, including giving them the right to picket and to sue their employers for breach of contract. As one of his political opponents put it: "The Conservative party have done more for the working classes in five years than the Liberals have in fifty." This was known as One Nation Conservatism from a phrase of Disraeli's, which basically meant that they should try and transcend differences of class, religion and interests; in practice, they viewed it as they, the upper classes, having a duty to look after the lower classes' welfare, though not neccesarily to work towards full equality. One Nation Conservatism is still considered to be one of the major strains of thought the Conservative Party today (along with Traditionalist "Faith, Flag, and Family"/"Sir Bufton Tufton" types and the Free-Market, quasi-libertarians labeled Thatcherites since the late 1970s), albeit with some changes from Disraeli's time, and were the dominant strain within the party for most of the 20th century (until Thatcher's ministry led to the ascendancy of the free-marketeers).

But perhaps the most awesome thing is not the political career but the career as a successful Romance Novel author that he engaged upon purely to fund his political career. He is very rare as a Prime Minister in that he had both great political and great social acclaim, although his books have not stood the test of time.

As a Historical Domain Character, Disraeli is associated with the following works:

Retrieved from "https://allthetropes.org/w/index.php?title=Benjamin_Disraeli&oldid=1593083"
Categories:
Cookies help us deliver our services. By using our services, you agree to our use of cookies.